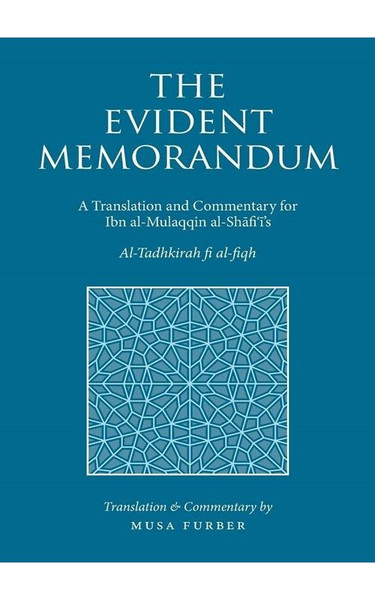 Weight:
32.60 Ounces
Short Description:
This volume contains an original commentary for Al-Tadhkirah (The Memorandum), a legal primer for Islamic Law according to the later scholars of the Shafi'i school by Ibn al-Mulaqqin.
Author:
Ibn al-Mulaqqin al-Shafi'i
Translator:
Musa Furber

This volume contains an original commentary for Al-Tadhkirah (The Memorandum), a legal primer for Islamic Law according to the later scholars of the Shafi'i school by Ibn al-Mulaqqin, an Egyptian scholar who died in 804 AH/1401 CE. The commentary introduces essential evidence for the core issues of Islamic Law from its primary sources (the Quran, Sunnah, legal analogy, and scholarly consensus).

The commentary is based on Ibn al-Mulaqqin's legal commentaries (Sharh Mukhtasar al-Tabrirzi, Khulasat al-fatawi, and Ujalat al-Muhtaj and works on legal hadiths (Tuhfat al-muhtaj, Mukhtasar al-Badr al-munir, and Al-Badr al-munir). The Evident Memorandum helps explain why Islamic Law includes specific topics and the essential evidence behind the Shafi'i school's opinion. It will be most beneficial to readers who are already familiar with Islamic Law and jurisprudence.

He was raised and looked after by Shaykh 'Isa al-Maghribi who was asked by his father to take care of his family after his demise.

He memorised the Qur'an as well as 'Umdat al-Ahkam at a young age and sought to study the Maliki fiqh in which he was convinced not to but instead to learn the Shafi'i fiqh by his fathers colleague and friend Ibn Jama'ah. So he studied fiqh with Shaykh al-Islam al-Taqqiy al-Din al-Subki, al-Jamal al-Isna'a'i, al-Kamal al-Nasha'i and al-'Izz ibn Jama'ah. He then travelled to Syria to learn from the scholars there and left no stone unturned in learning from Scholars there.

He was praised by his peers and was permitted to teach by Imam al-Mizzi and al-Shams al-'Asqalani. He produced numerous scholars among them being Imam Ibn Hajar al-'Asqalani and Ibn Nasir al-Dimishqi. He passed away in the year of 804 A.H.

Musa Furber has studied traditional Islamic sciences in Syria and Egypt since 1994. He received licenses to teach and to deliver legal edicts (fatwas) from senior legal scholars and jurisprudents (fuqaha and muftis). He resides with his family in Kuala Lumpur.

The Guide to the Path of Righteousness Vol 1&2

The Duties of Brotherhood in Islam

The Lives of Man