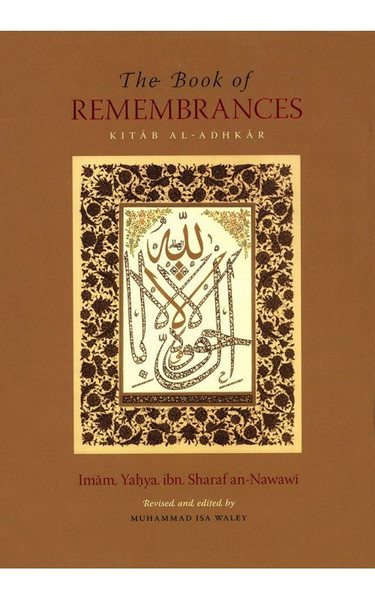 Short Description:
The definitive compilation of words of remembrance and glorification of (dhikr), and supplicatory prayer to (du'a), the Lord of the Universe, as related from the Prophet Muhammad (may Allah bless and exalt him).
Author:
Muhy al-Din Yahya ibn Sharaf al-Nawawi
Translator:
Muhammad Isa Waley

The Book Of Remembrances [Kitab al-Adhkar] - By Imam Yahya ibn Sharaf an-Nawawi Kitab al-Adhkar is the definitive compilation of words of remembrance and glorification of (dhikr), and supplicatory prayer to (du'a), the Lord of the Universe, as related from His final Emissary, the Prophet Muhammad (may Allah bless and exalt him).

Dhikr and du'a lie at the very heart of the din, the relationship between creature and Creator. As part of the Sunna or Prophetic Way, they are a divinely appointed means of approaching Allah Most High for all our needs, and of making use of all the moments of daily life to strengthen our tawhid, the existential and cognitive Unity that is the hallmark of Muslim spirituality. Also covered are the vital principles of speaking only what is good and avoiding the sins of the tongue.

Muhy al-Din Yahya ibn Sharaf al-Nawawi (631-676/123-1277) devoted his entire life to the pursuit of sacred knowledge. He is revered throughout the Sunni world as one of its greatest authorities.

Among his most famous writings are the Arba'in, a collection of forty Hadiths; a commentary on the Sahih of Imam Muslim; and Kitab al-Adhkar. Designed as a reference guide and a source of inspiration, this volume presents a clear and elegant English translation of Imam al-Nawawis classic, together with the text of every single prayer and invocation, both in Arabic letters and in romanization.

Also included are all the authors statements about those Hadiths which he related personally from his own teachers, and his guidance on the correct spelling and meanings of rare words and names. Finally, al-Nawawis comments on the sources of Hadiths are supplemented by further scholarly notes. Revised and edited by Muhammad Isa Waley.