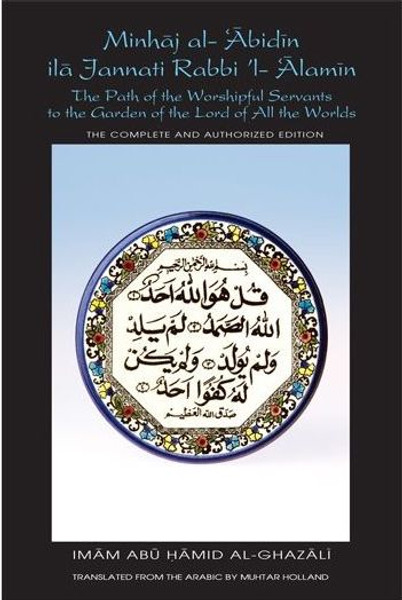 Short Description:
The author tells us how he implored Allah to make it possible for him to compose a book—one that would meet with unanimous approval, and the reading of which would result in positive benefit.
Author:
Imam al-Ghazali
Translator:
Muhtar Holland

The author tells us how he implored Allah “to make it possible for me to compose a book—one that would meet with unanimous approval, and the reading of which would result in positive benefit—and He inspired me with a marvelous arrangement, the like of which I did not recall in any of the previous compositions dealing with the secrets of religious practices.”

"We therefore looked into the subject of worshipful service, and made a careful study of its path, from its beginnings to its destinations, which are the desired goals of its travelers. It is indeed a rugged path and a hard road, fraught with many obstacles, serious hardships, remote distances, enormous difficulties, frequent hindrances and impediments. It is beset with deadly perils and interruptions, abounding in enemies and highway robbers, and offering very few companions and followers. This is exactly how it needs to be, since it is the path of the Garden of Paradise..."

He also said, “Worshipful service is the fruit of knowledge, the benefit of life, the income of strong servants, the stock-in-trade of the saints [awliya'], the path of the truly devout, the allotted portion of the mighty, the goal of those endowed with aspiration, the emblem of the noble, the vocation of real men, and the choice of those with faculties of vision. It is the way of good fortune and the path [minhaj] of the Garden of Paradise.”

Imam Abu Hamid Muhammad Al-Ghazali was born in 450 AH (1058 A.D) in the Iranian town of Tus, studied Islamic law and theology at the Seljuq College in Nishapur, and became a distinguished professor at the famous Nizamiyya University in Baghdad.

Despite his glittering success, he was inwardly dissatisfied, so he abandoned his career for the life of hardship, abstinence and devotion to worship. During ten years of wandering, he experienced a spiritual transformation, in which the Truth came to him at last, as something received rather than acquired.

Blessed with an inner certainty, he then applied his outstanding faculties and vast learning to the task of revitalizing the whole Islamic tradition. Through his direct personal contacts, and through his many writings, he showed how every element in that tradition could and should be turned to its true purpose.

Imam al-Ghazali was fondly referred to as the "Hujjat-ul-lslam", Proof of Islam, he is honored as a scholar and a saint by learned men all over the world and is generally acclaimed as the most influential thinker of the Classical period of Islam.

Muhtar Holland was born in 1935, in the ancient city of Durham in the North East of England. This statement may be considered anachronistic, however, since he did not bear the name Muhtar until 1969, when he was moved-by powerful experiences in the latihan kejiwaan of Subud-to embrace the religion of Islam.

His freelance activities have mostly been devoted to writing and translating in various parts of the world, including Scotland and California. He made his Pilgrimage [Hajj] to Mecca in 1980.