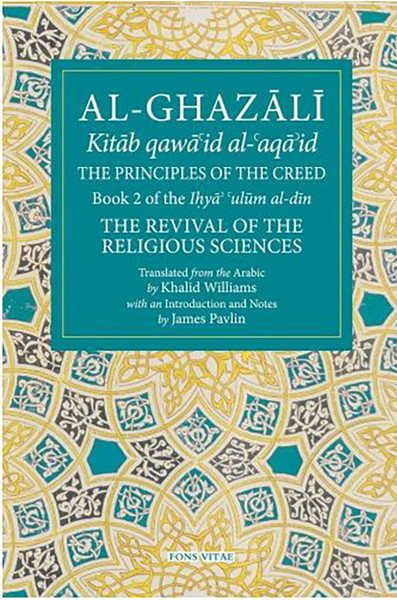 In the Principles of the Creed (Kitab Qawa'id al-'aqa'id), the second of the forty books of the Revival of the Religious Sciences (Ihya' 'ulum al-din), Abu 'amid al-Ghazali explains the fundamental beliefs of Islam, those that concern faith in God, His revelation, His messengers, and the hereafter. The scope of these beliefs includes the nature of God, Muhammad’s status as a prophet, the virtues of the Companions, the events related to the resurrection and judgment, and the nature of faith itself. This presentation of beliefs goes beyond a list of creedal statements; al-Ghazali cites the scriptural foundations in the Qur'an and hadith, refers to transmitted reports from the Companions and others from the righteous predecessors, and supports these beliefs with rational arguments.

In chapter 1, which presents a succinct summary of the essential aspects of the Muslim creed, the Arabic text appears on facing pages. Chapter 2 discusses how religious instruction should be imparted gradually, the stages and levels of conviction, the ruling on studying debate and theology, the outward and inward creed, and the difference between the two. Chapter 3, the “Jerusalem Epistle on the Principles of the Creed” (al-Risala al-qudsiyya fi qawa'id al-'aqa'id), is a detailed exposition consisting of four pillars: the recognition of the essence of God, the knowledge of the attributes of God, the knowledge of the acts of God, and belief based on transmitted reports about God from the Prophet. Chapter 4 examines faith and Islam, what connects and separates them, whether faith can increase and decrease, and whether the predecessors qualified their claims to faith (by saying “God willing”).

Abu Hamid al-Ghazali (d. 1111) was a leading scholar, jurist, and theologian of the golden age of Islam, and he remains its truest advocate in modern times. As a teacher of both inward and outward faith, he recorded these practical teachings in his forty-book compendium of Islamic knowledge.