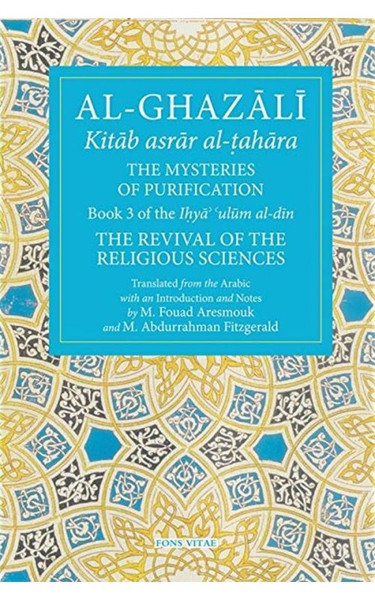 Author:
Imam Al-Ghazali
Short Description:
A book from the renowned Ihya Ulum Ad-Din, by Imam Al-Ghazali, The Mysteries of Purification delves into the subject of ritual and spiritual purification.
Publisher:
Fons Vitae

In The Mysteries of Purification (Kitāb asrār al-ṭahāra), the third of the forty books of the Revival of the Religious Sciences (Iḥyāʾ ʿulūm al‐dīn), Abū Ḥāmid al-Ghazālī explains the fundamentals of the purification that is necessary in order to perform the five daily prayers.

The book begins with an introduction to the general topic of purity. Al-Ghazālī explains the ḥadīth “Purification is half of faith,” and reminds readers that, for the earliest Muslims, inner purification was much more important than outer purification.

Imam Abu Hamid Muhammad Al-Ghazali was born in 450 AH (1058 A.D) in the Iranian town of Tus, studied Islamic law and theology at the Seljuq College in Nishapur, and became a distinguished professor at the famous Nizamiyya University in Baghdad.

Despite his glittering success, he was inwardly dissatisfied, so he abandoned his career for the life of hardship, abstinence and devotion to worship. During ten years of wandering, he experienced a spiritual transformation, in which the Truth came to him at last, as something received rather than acquired.

Blessed with an inner certainty, he then applied his outstanding faculties and vast learning to the task of revitalizing the whole Islamic tradition. Through his direct personal contacts, and through his many writings, he showed how every element in that tradition could and should be turned to its true purpose.

Imam al-Ghazzali was fondly referred to as the "Hujjat-ul-lslam", Proof of Islam, he is honoured as a scholar and a saint by learned men all over the world and is generally acclaimed as the most influential thinker of the Classical period of Islam.