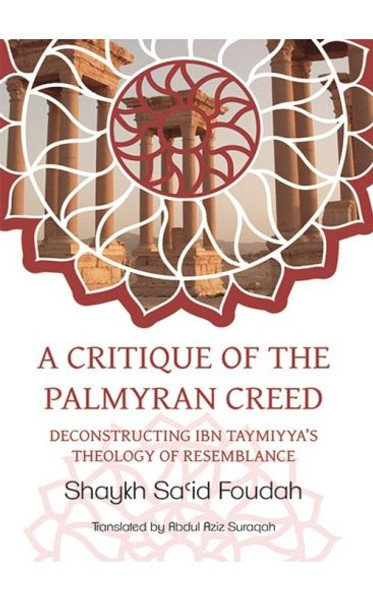 Short Description:
Shaykh Sa'id Foudah clinically refutes 'The Palmyran Creed' the book in which Ibn Taymiyya presents the foundations of his theology, expounds upon its principles and offers his arguments in support of it.
Author:
Shaykh Saʿid Foudah
Translator:
Abdul Aziz Suraqah
Publisher:
Sunni Publications

Perhaps one of the most controversial scholars of the classical era, Taqi al-Din Ibn Taymiyya’s works in theology have been promoted by the modern day Salafi movement as an accurate representation of the creed of the predecessors [salaf]. In The Palmyran Creed, named after the ancient city of Palmyra (Tadmur, Syria), Ibn Taymiyya presents the foundations of his theology, expounds upon its principles and offers his arguments in support of it. At the heart of this lies his claim of affirming only what Allah and His Messenger (P.B.U.H) affirmed of the Divine attributes [sifat], “without inquiring into the modality [takyif], drawing likeness [tamthil], or engaging in alteration [tahrif] and denial [taʿtil],” ostensibly purifying Divine Oneness [tawhid].

In his critique of The Palmyran Creed, renowned contemporary theologian Shaykh Saʿid Foudah clinically refutes Ibn Taymiyya’s claim, demonstrating that it could not be further from the truth. The Taymiyyan theology of resemblance [tashbih] is deconstructed and the anthropomorphic premises [tajsim] for what Ibn Taymiyya considers to be the reality and attributes of Allah are revealed. Shaykh Sa'id establishes, rationally and textually, that ascriptions such as hands, eyes, face, shin, movement, direction, change, spatial contact, limits and boundaries are inconceivable with respect to Allah, and that nothing can possibly share in His reality. This ground breaking work elevates contemporary Muslim discourse beyond superficial polemics and into deeper realms of the rational sciences.

Shaykh Sa'id bin 'Abdul Latif Foudah is a gifted young Shafi'i, Ash'ari scholar of 'Ilm al-Kalam, Mantiq and Usul al-Fiqh, as well as one of the most meticulous experts of our times on the creed of Ibn Taymiyya.

Born in 1967 in the city of Haifa, Palestine he moved at a very young age with his parents to Amman, Jordan where he still lives and teaches today.